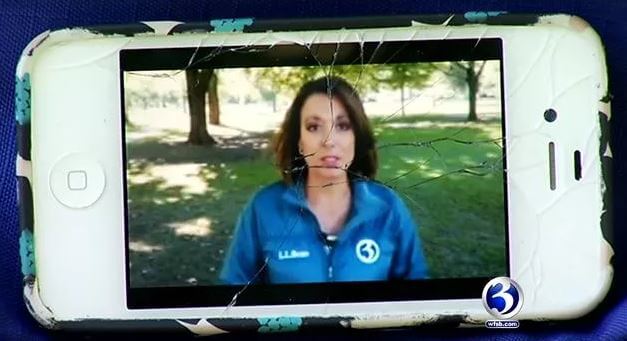 It’s happened to many of us. You have an expensive, top-of-the-line smartphone in picture perfect condition and then it happens: the screen cracks.

Buying a new phone is often an option that’s way too costly, so what about just fixing the screen?

Almost everyone has a cell phone these days and it’s something most of us rely heavily on. We keep our contacts in it, set reminders for that important event and even keep up with friends and family with social media. So when the unthinkable happens and the screen cracks, are you prepared to hand over hundreds of dollars to get it replaced?

Did you know there were other options?

Channel 3 Eyewitness News’ Courtney Zieller decided to look into other options to replace that cracked screen. Since she specifically had an iPhone, she went first to the maker – Apple.

It’s no secret that the stores are always busy with people looking for help from the “Geniuses.” But guess what? Unless you make an appointment in advance to speak with one, there’s a good chance you’ll be standing around for a long period of time looking for help.

When you do bring in an iPhone for repairs, Apple says you’ll likely get it back on the same day, but the prices, well, you be the judge.

Allie Drysten took her phone to an Apple store and paid $200 for a replacement screen.

“If I told you there are cheaper options, would you be interested?” Zieller asked.

“Of course!” Drysten said. “We’re in a recession.”

So Zieller shopped around and found some cheaper options than going to the Apple store. Shipped right to your door, a do-it-yourself kit costs about $24.95 on Amazon.com.

In the small box that arrived at WFSB were all the parts needed to replace the screen.

She said she didn’t even start the repair process and ran into a huge problem. The kit didn’t come with any directions to actually fix the phone.

So her next step was to head to YouTube to find a tutorial on how to fix a broken iPhone screen.

Zieller started the timer to see how long the process would take, and following the YouTube video, she started by unscrewing two very small screws on the bottom of the iPhone.

Just a few minutes in, and she ran into another problem.

“This one won’t unscrew,” she said.

With the help of her colleague, Peter, the screws come undone. But then another screw doesn’t let up.

And another colleague comes to the rescue, and the audience just keeps getting bigger and bigger.

While she continued to work, she realized that according to YouTube, all of the screws need to be replaced exactly how they came out of the phone.

One hour and five minutes into the repair operation and Zieller gives up hope for the moment, as does the support group that gathered around her while she was working.

She said she couldn’t really blame them.

She said she thought she was done, but with the numerous iPhone parts scattered on her desk she revisited the project days later. She was still having issues with the screws, and two hours later she officially gave up on the project.

Another way to combat those expensive repair costs at Apple, a shoreline business once specializing solely in computers has started a side speciality – fixing 100 iPhones a week.

“The need is out there,” Dave Colella, owner of Nerds to Go, said.

Because many of us have them, and at some point will drop them.

“People want that particular iPhone fixed more than any other technology that we see,” Colella said.

And the proof is on the counter, which is why Nerds to Go in Guilford is always busy.

“All these little tiny cables, you need to be very careful,” he said. “Those are very fragile.”

After all the dirty work is done, in less than an hour, the finished product is revealed.

“Now we have a working iPhone,” Krenicki said.

Depending on the model of phone, Nerds to Go, an authorized Apple repair business charges $99 to $129, carries a 60-day warranty and will even come to your home.

But you’ll never guess where there’s an even cheaper fix – a nail salon in Litchfield County.

The iPhone repairs are a side job, the unidentified nail salon owner said, and he charges between $60 and $65 to fix a broken iPhone screen in just a matter of hours. He also said he can usually fix a water-damaged phone, too.

So the choice is up to you. Shovel out the hundreds of dollars at an Apple store to replace that cracked iPhone screen, or try one of the other, cheaper options Zieller tested out.